What are Variable Fonts?

Webfonts are one of my favorite parts of making websites. When I first started learning web development back in college in 2011 we were still trying to stick to a short list of web safe fonts. Eventually Google Fonts really opened the door for anyone to use high quality web fonts, and toally for free. The downside to this approach is that its very easy to go overboard. Fonts are a heavy web resource, and loading a light, regular, bold, extrabold (and italic multiples!) for every font can get heavy very quickly.

Variable fonts are an evolution of the OpenType font specification that enables many different variations of a typeface to be incorporated into a single file, rather than having a separate font file for every width, weight, or style.

That means that by loading just one file it is now possible to use the font-variation-setting css property to specify weight, italic, width, and really anything else a typographer might imagine. There are some very cool examples on v-fonts.com, and I also put together my own tool.

There are downsides to this, though

There are two factors to consider with loading fonts, or really resource, on the web - number of requests and payload size. Since fonts tend to be both heavy and have numerous files for their variations, variable fonts solve the first part of this equation by loading a huge combination of font settings by making just one request and downloading only one file. However, the drawback to using one file that contains multitudes is that this file is usually much, much larger than any one file containing only a single variation. There’s a balance to be made, with the size of a font file and the number of variations that get used on a site. If its only one or two, it might be better going the traiditional route and making more requests but for much smaller files.

What is the best ways to load large files?

Because I love doing strange things with CSS, I’m choosing to bring some variable fonts into my site just so I can experiment with them. What’s the best way to do this? Well, today that’s exactly what I want to find out. As they said on Mythbusters once -

Science Gothic is the font I’ll be using for this test. This font has 4 axes, and is about 1.2MB uncompressed, which is a lot.

I will be using the Google Lighthouse Firefox extension to check page speed, and taking the average of five results. I’ll be hosting the site on Netlify, with each test site being a separate pull request and preview deploy.

For a baseline in this experiment, I’ve made a fresh Gatsby site that contains the following code:

I’m testing the page’s Lighthouse ranking with no extra fonts loaded to see what the weight of a “normal” web page under these circumstances would be.

Where to keep the fonts?

The first part of this test will be Gatsby specific.

Gatsby offers two places to keep files - in the src directory of the project, or outside in the static folder. For these test I’ll be putting the font file in each of these places, as well as loading from an external CDN, and running the same average of five speed tests. Each site will be using the same @font-face declaration:

The external CDN is another Netlify hosted site I set up that only contains the .ttf file for the font.

These numbers were roughly what I expected. Gatsby reccomends putting all assets in the src folder to take advantage of optimization, and actually advises against using the static folder for this sort of thing. I knew that loading the font from an external server would preform worse than self-hosting, but I decided to test it anyways because I guess you never really know until you try.

Is there any way to speed Gatsby up?

Gatsby does offer this first party plugin to help apply preloading to font calls (more on what exactly that means later). Here is the same speed test again, but with this plugin and its generated font-preload-cache.json file included.

These actually were not the results I was expecting at all…

Externally hosted fonts were cached, which makes sense they would show a performance boost, but it seems like adding this overhead to already self-hosted fonts actually makes them load slower somehow?

From the docs for this plugin:

It works really well with services like Google Fonts that link to stylesheets that in turn link to font files.

This tracks with the improvements from the CDN link, but it would seem from this data that for self-hosted fonts there’s actually a performance penalty for trying to load them this way.

I know that I want to self-host these fonts, so to speed up testing I’m going to rule out the CDN and gatsby-plugin-preload-fonts. I’ll still be testing both the src and static directories because even though it is against Gatsby’s recommendation, there is some added benefits and caching opportunites to keeping files in the static directory.

How to load the fonts?

Another relatively new feature of the web is the ability to add a rel attribute to a <link> tag in the site’s <head> for “resource hinting.” This attributes gives the browser a heads up about the type of content being loading, and give some clues about how to load it and how soon it will be needed by the user.

The preload value of the element’s rel attribute lets you declare fetch requests in the HTML’s , specifying resources that your page will need very soon, which you want to start loading early in the page lifecycle […]

In short, preload is a flag to the browser that this resource, be it a font, javascript, or a critical css file, needs to be downloaded as soon as possible. The most important part about this is that the file will be loaded in a non-blocking way, meaning that the rest of the page can progress while the font is still downloading.

Notes on other rel values

I won’t be exploring the other potential rel values in this post because they don’t seem to apply to my use case (and it definitely isn’t because I waited until the last day of the month to get this blog post out…). According to the W3C spec, the other resource hints apply mostly to outside resources, which aren’t super relevant since I’ve already demonstrated the advantages of self hosting fonts.

Since these are self hosted files I shouldn’t see any speed benefits here. These attributes seem most applicable to something like an externally hosted font, or a fetch request to needs to go to another url to get data.

Since I’m intending the file to be loaded as fast as possible on any page, I don’t think I’ll get any speed benefits here either. These attributes seem most applicable to a specific page deeper in the site hierarchy that requires some heavy loading.

How to display the fonts?

While large web fonts load in the background, browsers try to do their best to handle styles in the meantime. Flash Of Invisible Text (FOIT) and Flash Of Unstyled Text (FOUT) are two issues that developers have wrestled with for years, but thanks to the relatively new font-display property style authors finally have some control over what happens before and during load times.

The font display timeline is based on a timer that begins the moment the user agent attempts to use a given downloaded font face. The timeline is divided into the three periods below which dictate the rendering behavior of any elements using the font face.

There are four possible values that the font-display property can take.

This means that the browser will quickly check if the font is available, if it isn’t the fallback font will display. This basically means “the font is optional to the design.”

This means that the browser will also quickly check if the font is available, but it will provide a short period afterwards for the loaded font to be swapped in.

This option quickly checks for the font, but lets the loaded font appear at any time afterwards.

This option give the longest possible time to check for the font before rendering a fallback, but also lets the loaded font appear at any point.

In the above comparison the fonts are loaded after clearing the cache. The block period of the font can be observed in the time it takes the numbers to appear. The furthest left block, set to optional, will never load the font since it could not be downloaded during the short block period. The second to left block, set to fallback, fails to load the font during the block period, but it also fails to load during its short swap period. This means that this block will also not display the font. The third block, swap, loads the same as the fallback block but due to its longer swap period it does eventually display the font. The final block, styled with block is notably different because it has the longest block period. This is why the numbers appear later than in any other example, and due to its infinite swap period it will always eventually load the font.

How to avoid flashes all together?

It would be nice if fonts could load instantaneously, and though that technically is possible I do have to advise against it, at least for this scenario with such a large font file.

Base 64 is a way to translate binary files into a text string. This can be done to most types of files, including fonts. That font can then be used as data in a number of places in css, including background-images, pseudo element content, and even @font-face declarations.

Because the data has been transposed to text, it can now be downloaded as part of a the site’s css (or js, if css-in-js is your thing) bundle. Just like with variable fonts themselves though, number of requests is only half the equation here. This will greatly increase the size of the overall bundle, and depending on the size of the font, probably isn’t ever a good idea. 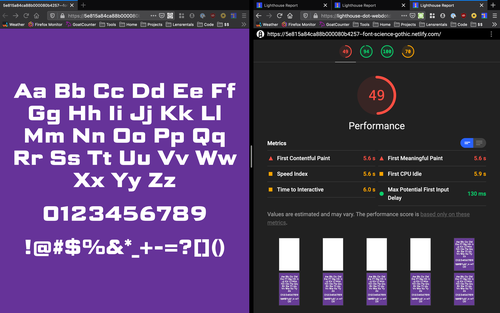 To compare the data:

Can JavaScript help at all?

There are some javascript options, probably the most popular of which is the Web Font Loader (which Gatsby does have a plugin for), but these tools don’t tend to make the font load any faster. Instead tools like this help control unwanted flashes by using javascript to add or remove a classnames (wf-loading in the case of Web Font Loader) on the body of the page so that fonts can be hidden or styled differently while files load in.

I did make a test page using Web Font Loader, but this actually hurt performance by adding to the overall size of the javascript bundle. The biggest downside to this approach, in my opinion, is that custom fonts will actually never load for users with javascript disabled since there is no mechanism to swap out class names when fonts are made available and shutting off features to users is something I try to avoid whenever possible.