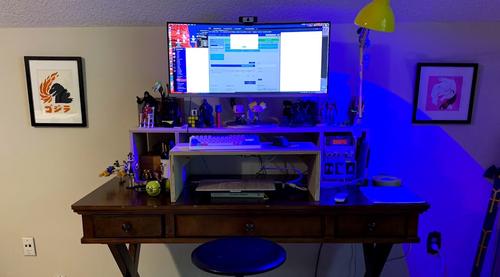 I have a pretty unorthodox, DIY sitting/standing desktop combo that I made with a friend a few years ago. It was originally made to work with a different set of monitors, but it still works okay with my current setup. I have plans to rebuild it in the near-ish future.

The light is an Ikea Terital work lamp with a Philips Hue Color bulb.

This particular site is made with:

A list of things I try to avoid using:

The ability to quote tweets directly on a website is useful, but including Twitter’s javascript on the page gives Twitter the ability to add tracking scripts to a site. I like Twitter, I use it, but I don’t personally think it needs to follow people around the web all of the time. In fact, Firefox actually now blocks these tracking cookies by default, so users of my site will have to live with a styled <blockquote /> whenever I need to quote a tweet, even my own, directly on my site.